Lawyer and Youtuber Maureen Waititu has announced the sudden demise of her sister Pauline Njeri Waititu.

“What a week!😥 My family lost our youngest sister,My heart goes out to every family robbed of brilliant young lives. My heart is broken for my dad-he just buried his mom now his youngest daughter.

Time goes by fast. Hold onto those you love & don’t take a moment for granted.”

Maureen mourned her sister. She added that the loss is huge blow to the Waititu family since they had lost their grandmother a while ago. Maureen has urged her fans to pray for the family during these challenging times.

“Rest in peace little sis. Please keep my family in your prayers,”.

In recent times Maureen has opened up on what transpired with his baby daddy [Frank Gym It] and has revealed a lot about his upbringing and how this affected her relationship.

She says her dad was missing from their lives while growing up and she had learned much about dealing with men who affected her relationship with Frankie who doubled up as Youtuber.

“Unfortunately, I have been raised alone. Just me and my mum. My father has never been in my life. It has affected me and my marriage and I realized this after the breakdown of my marriage,” Maureen said back then.

They reunited at a very important ceremony for the content creators as she also revealed how important it was for them to reunite. 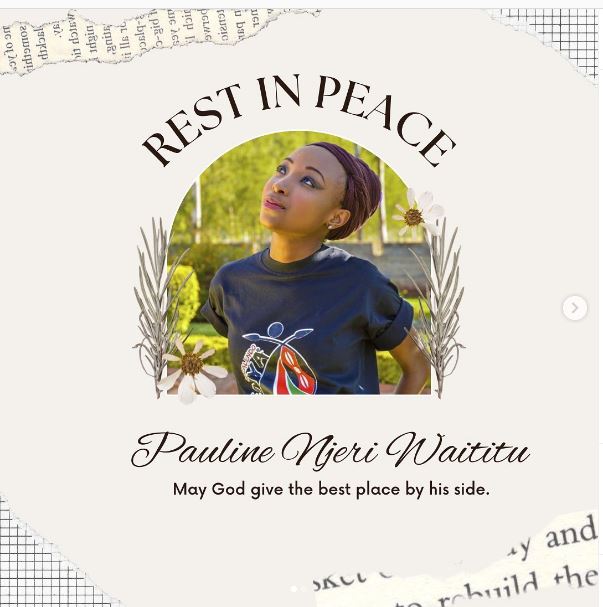 Her celebrity friends sent messages of condolence to Maureen and her family.

nyaminde I am so sorry for your loss @maureenwaititu So unfortunate!

jackyvike so sorry for the loss

massawejapanniPoleni sana Maureen! It is well🙏

milly chebby so sorry for your loss Mo

condolences to Maureen and the Waititu Family. God is in control- Monitor254 team.